This dinner was inspired by Martha Stewart and the need to use stuff up (namely, half a brick of cheddar cheese). A while back, I discovered the rigatoni “cake” at Martha Stewart dot com. The idea was too clever not to try, so I used my own red sauce recipe and followed the assembly instructions successfully. The end result: a delightful looking cake of tall pasta tubes with cheesy topping. Sliced in giant wedges, it just begged for candles and a round of Buon Compleanno. It’s the kind of recipe that delivers . . . provided you are patient and attentive to details.

Tonight, I decided to try a cheesy version. I made two individual portions in a pair of mini-springform pans for dinner and prepared the rest in a smaller baking dish to freeze for later. With a little garnish of bacon and tomato salad on the side, this comforting meal is sure to satisfy. We had some tilapia and white wine to go with. Next time, I think I’ll skip the fish and make a bigger salad. 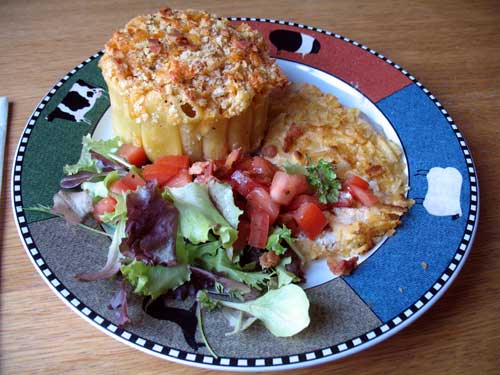 The process might seem complicated, but it’s really easy and fun to do. Kids could definitely help with the recipe, and the results are really special.  Dinner was awesome, and I can’t wait to do it again. 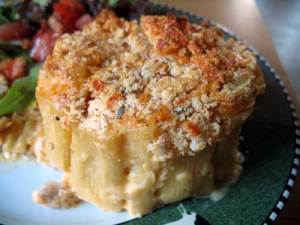 It’s all about the technique . . . and that yummy cheese sauce! I managed to make the sauce in the time it took to boil water and cook the rigatoni. If you aren’t confident about juggling two tasks at once, make the pasta first and assemble it in the baking pans, then focus on the sauce. Use a springform pan for the prettiest results and easy slicing. A regular baking dish with high sides will do, though.

Fat plus flour equals a roux, the beginning of any good gravy or thick sauce. Cook and stir, cook and stir. Watch over your sauce as it cooks, and stir constantly.